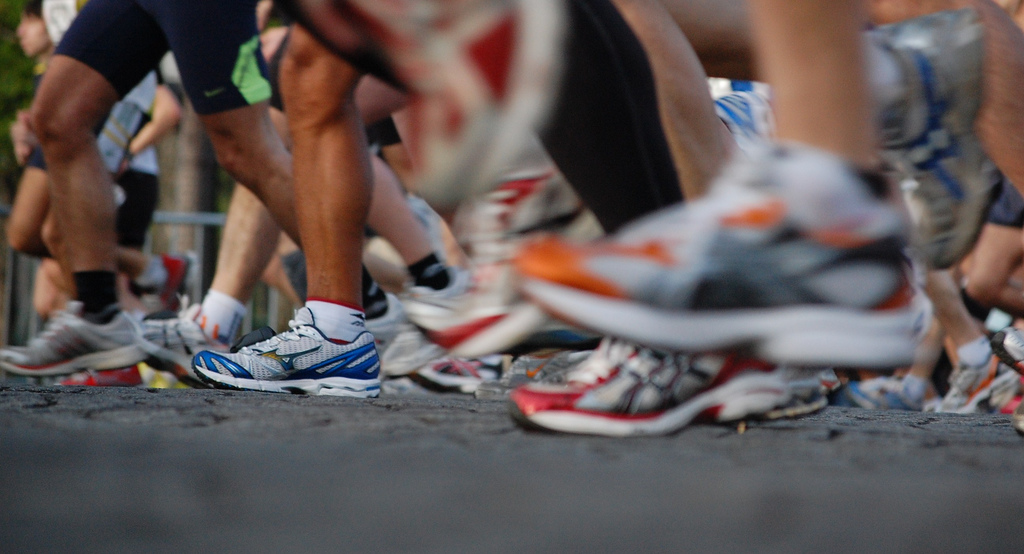 In just a little over one month I’ll be taking part in my second half-marathon, the Royal Parks Half. Having not only completed but enjoyed my first half-marathon around this time last year, I’ll be crossing the start line with the additional confidence that comes from knowing that I can do this, because I have done it before.

That’s not to say that 21k isn’t a facer: it remains a significant mental challenge for me as well as a physical one. At 5-foot-nothing, I have to put in rather more strides than my taller counterparts: last year my running partner (a tall man) completed the track more than half an hour before I did, but did I get a prize for stamina? Not a chance.

But that’s ok. Only a couple of years previously I’d given up thinking I’d ever be able to run any distance at all, due to long-standing foot pain (metatarsalgia and Morton’s neuroma) and near-constant lower back pain along with tight hips, tighter hamstrings and a general feeling of exhaustion and low energy, exacerbated by stress, commuting and over a decade spent in office chairs.

The idle thought in my twenties that ‘it would be amazing to do the London Marathon some day’ had transmuted into unachievable pipe dream by my early thirties: if I couldn’t see my way to even a half-hour of running, what hope even for a 5k ‘fun’ run?

Two things changed that. The first was Couch to 5k, the incredible coaching programme that promises to turn even the most resistant sofa-surfers into fully-fledged runners in return for just a little regular effort spread out over a reassuringly long amount of time (9 weeks). That got me over the initial mental barrier and developed my cardiovascular fitness to a point where I could confidently set out on a half-hour run without needing to stop.

But beyond 5k? That I owe to a little bit of determination, and Rolfing. I completed the most intensive and personal part of our training, from 2012-2013,  at the same time as embarking on the half-marathon training that culminated in my completing Run To The Beat, the music half-marathon that snaked a 21k path from Greenwich Park to Woolwich and back via the Millenium Dome, and raising £1000 for charity in the process.

When it comes to running, Rolfing has taught me a number of things. More than anything else, it has taught me to pay close attention to the way I move and hold my body, to notice my patterns of tension and to begin to analyse my own running style. 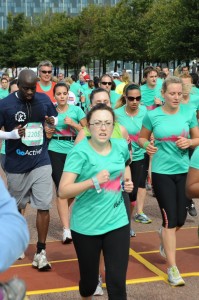 I’m a slight underpronator, for example, which means that I’m more likely to transmit my body weight into the outside of my feet and roll less effectively across my foot to achieve the ‘toe-off’ movement (from the big toe) that is key to a powerful and fluid running style. In the second and fourth sessions of Rolfing, in particular, we pay close attention to the feet and the lower legs, which helped my feet to become more supple and adaptive and distribute and absorb the pounding forces of running across my feet and body.

Years of ‘tucking my tail’ (a previously common instruction in both the worlds of weight-training and yoga) had wreaked merry havoc, meanwhile, with both my hamstrings and my sacroiliac joint, and the tight, adhered tissues of my iliotibial band and quad muscles led to inflammatory niggles at both ends of the equation: pain at both knees and hips. Overuse of my quads masked weakness in my adductors and pelvic floor, and restricted my ability to extend (ie. move back) my leg at the hip-joint, thereby reducing both the length of my stride and the duration of my heel strike.

No surprise to learn that greater balance and mobility in my hips, feet and legs could help me as a runner, but it was Rolfing that taught me to understand and feel the connection between my legs and my upper body in respect of my running performance. It was only over a longer period of time that the intellectual discovery of the role played by both the psoas (pronounced: so-as) and the intercostals (the muscles between the ribs) took on the qualities of experiential revelation.

It was my first Rolfer, Alan, who featured in the Guardian’s recent article about running and Rolfing, who first made me aware of the psoas, memorably asking me where in the body I thought the muscular movement of the legs began. Like most people would, I pointed to the top of my thighs, assuming that running and walking were all in the movement and muscle power of the legs directly. Obvious, right?

Not so fast: the remarkable psoas muscles attach to the inner side of the thigh bone, extend across the pelvic basin before diving deep into the abdomen, and finally attach to the front of the lumbar vertebrae, making fibrous connections with the crura of the respiratory diaphragm.

That’s a tricky, somewhat technical last sentence, so let me run that past you again, in simpler, more awe-inspiring terms: we have muscles that connect the legs to the spine, and the legs to the diaphragm: the psoas muscle literally connects walking and breathing. The work we do in the fifth session of Rolfing to restore tone and length to the psoas helped me become a faster and lighter runner.

I also learned about the work of Professor Serge Gracovetsky, who makes the startling contention that, when it comes to walking and running, the role of the legs is merely to amplify the movement that starts at the pelvis and is sustained and powered by both the muscular and fascial tissues of the intercostals, the muscles between the ribs.

Like a squeezebox, he argued, the intercostals store and transmit kinetic energy by compressing and releasing rhythmically to create a ‘spinal engine’ that powers the movement of the legs through the translation of the side-to-side rolling movement of the pelvis through spinal rotation and outwards into the ribcage and shoulder girdle. Knowing this, I began to explore the movement of my ribcage as I ran; feeling it, I developed my core power and flexibility and could gradually ease the load on my overworked legs and feet.

The result? A first half-marathon under (and above!) my belt; a lither and more lifted torso and a better understanding of my body that combined my embodied experience with anatomical knowledge.

Can Rolfing help you become a better runner? Absolutely.

Click here to book your first session with Naomi.

Naomi is running the Royal Parks half-marathon on 12 October 2014 to raise money for MicroLoan Foundation, a small charity that provides small loans to enable enterprising women to build new businesses in rural Malawi and Zambia. Please click here if you’d like to make a donation, and thank you!

Become a friend of London Rolfing

News and offers straight to your inbox.

Thank you! Please check your inbox for a confirmation message.